I looked up for a way to interrupt these projections myself and found this answer on Stack Exchange. It basically requires an image editing tool (I used Photoshop) and a bit of patience. I’ll just put it here for convenience:

If you look at a random example of the interrupted sinusoidal, each perfectly vertical meridian corresponds to a single sinusoidal projection.

Then, cut and shift the parts to line up: The bottom left part is composed of longitudes -180..-100 and latitudes 0..-90, and projected with a center longitude of -160. The next part is longitudes -180..-40 and latitudes 0..90, projected w/ a center of -100. And so on (the example I linked was pretty intricate & there might be funny business going on in Russia; it doesn’t look like a vanilla sinusoidal there).

It doesn’t have to be sinusoidal; any pseudocylindrical, lenticular and other similar projections can be used, such as the Robinson or Hammer projection. However, it’s best to use a projection that has a straight equatorial line to make it easier to cut the north and south parts. The projection also doesn’t need to be equal area; while most of the commonly used interrupted projections are equal area (e.g. Goode homolosine), compromise projections (e.g. Winkel tripel) can still be used, resulting in an even more minimum-error map.

The rule of thumb is, if both the central parallel and meridian are straight, and the widest part of the projection is on the center, then it’s most likely interruptible.

Before proceeding to the manually created examples, let’s see all the projections that can be interrupted by G.Projector.

The Boggs eumorphic projection is an arithmetic mean of the sinusoidal and Mollweide projections. The difference between this projection and the Goode homolosine is that this one is an average of the two projections, while the latter is simply a fusion of them.

The Goode homolosine is a fusion of the sinusoidal and Mollweide projections at 40°44’11.98’’ (approx. 40.737°). The projection was originally copyrighted but then expired, because it’s not possible to copyright mathematical designs in the US, map projections included.

The name itself is a portmanteau of “homolographic” (Mollweide’s alternative name) and “sine”.

Oddly enough, the Goode homolosine uses the uninterrupted format by default despite it being rarely shown that way.

F. Webster McBryde developed a series of equal-area projections for use in interrupted maps. These projections are patented, but the equations are publicly available, owing to the inability of copyrighting mathematical designs in the US. G.Projector offers all of them in the software, and they use McBryde’s landmasses interruption patterns by default, although other interruption methods (including the McBryde oceans interruptions) and uninterrupted maps are available.

The following maps use Goode’s interruption patterns for consistency.

The McBryde P3 is a fusion of the Craster parabolic (hence the P designation) and McBryde-Thomas flat polar parabolic projections at 49°20’ (approx. 49.333°)

The McBryde Q3 is a fusion of the quartic authalic (Q designation) and McBryde-Thomas flat polar quartic projections at 52°09’ (52.15°).

The McBryde S3 is a fusion of the sinusoidal and McBryde-Thomas flat-polar sinusoidal at 55°51’ (55.85°). Interestingly, whoever wrote the G.Projector user’s manual doesn’t seem to know the second projection of this, replacing it with “???” instead.

The quartic authalic projection is an equal area projection first invented by Karl Siemon in 1937 under the name of Siemon III, but was reintroduced by Oscar S. Adams in 1944, commenting that “as far as we know, no such projection has been heretofore proposed.” It was named so due to its fourth-order curves.

The Siemon IV projection is a modification of the quartic authalic with axes adjusted to a 2:1 ratio by dividing x-values and multiplying y-values by 1.05391.

The Equal Earth projection is a new pseudocylindrical equal-area projection designed by Bojan Savric, Tom Patterson and Bernhard Jenny in 2018, and was inspired by the Eckert IV and Robinson projection. It was made in response to the adoption of the Gall-Peters map by Boston public schools and serves as a visually appealing alternative to it.

This example uses the Goode interruption pattern (displayed as “Interrupted: Continents” in G.Projector), but any interruptions can be used.

Interrupting this map reveals a substantial vertical stretching on low- and mid-latitude regions.

The Fahey projection is a modification of the cylindrical stereographic projection designed by Lawrence Fahey in 1975. The parallels are spaced for a Gall stereographic based on a cylinder secant at about 35° instead of 45°, making it closer to the less-known BSAM cylindrical, which uses a standard parallel of 30°.

This example uses the Baker interruption pattern, which is used for the Baker dinomic projection. 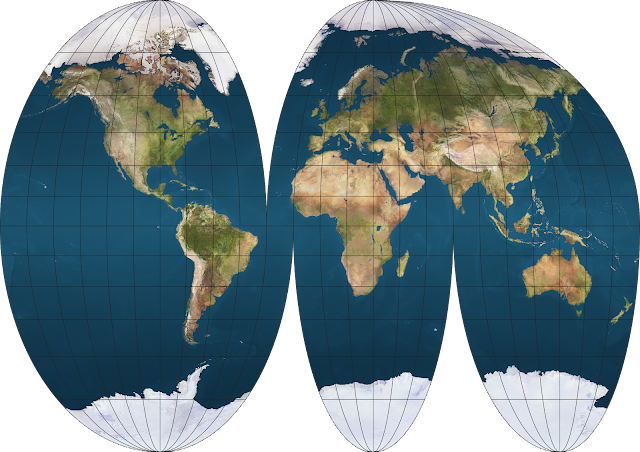 The Foucaut stereographic equivalent is a novelty equal-area map projection, named so because the spacing of the parallels along the central meridian is the same as that of the equatorial stereographic azimuthal projection (or of Braun’s stereographic cylindrical). It has very sharp poles and much more extreme shearing in the polar regions than that of the sinusoidal, so it’s essentially useless for general-purpose maps. 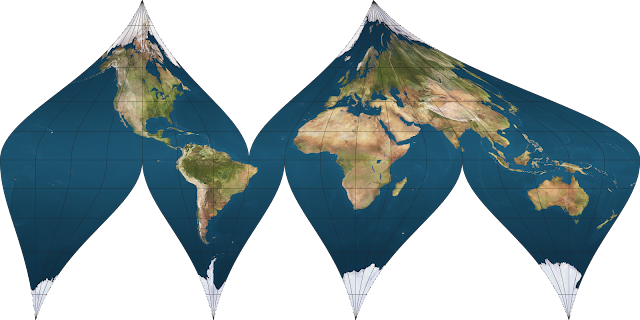 The Foucaut stereographic equivalent projection with Goode interruption pattern. Clearly, not even interruptions can help save this map from being really distorted.

The Larrivee projection somewhat resembles Van der Grinten I in terms of maintaining distortions but has somewhat less distortion and no circular arcs. The poles are also of curved lines. 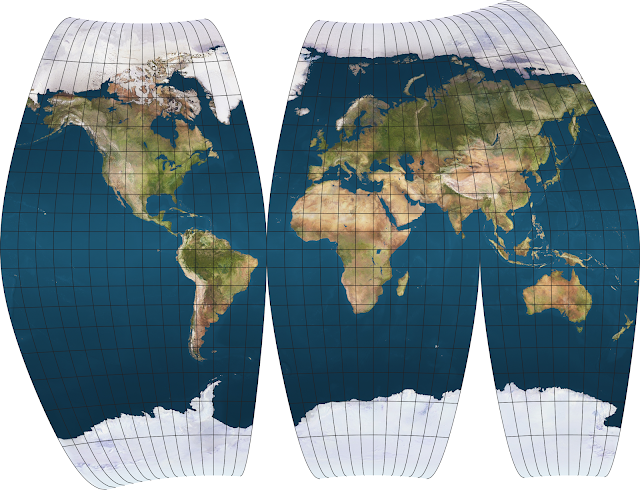 The Larrivee projection with McBryde interruption pattern. Because the poles are curved inwards, each lobes have different pole sizes.

The loximuthal projection is a compromise projection that was designed so that straight lines from a chosen center are loxodromes or rhumb lines of true length, path, and direction from the center. Its reference (central) latitude is adjustable to the user’s needs. 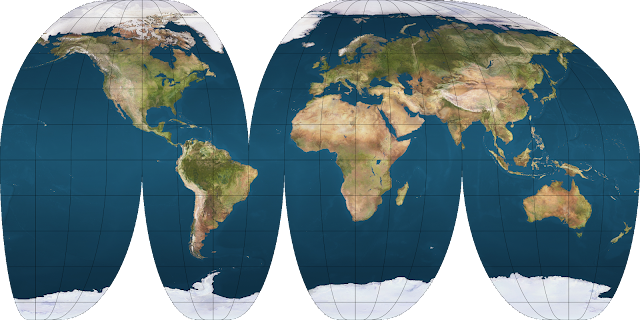 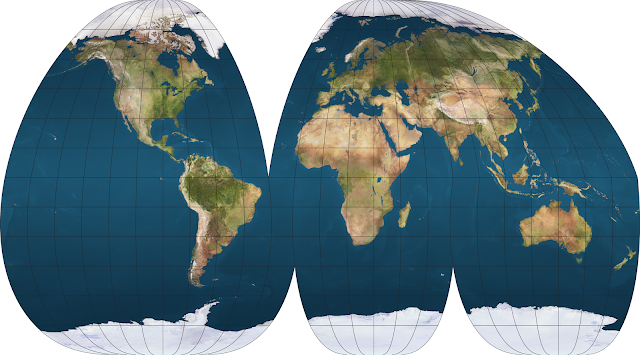 This is what happens if you try to interrupt a loximuthal projection that isn't centered on the equator. Notice the odd curves at the lower portions of the map. Fixing this requires readjusting the interruption center, which should be at 45 degrees south in this case.

The Kavrayskiy VII projection is a minimum-error compromise pseudocylindrical projection. It balances areal and angular distortions to an acceptable level, just like Robinson and Winkel tripel. However, it’s very rarely used outside of Russia and former Soviet Union countries.

Compared to Robinson and Winkel tripel, Kavrayskiy VII has very simple equations, which is amazing considering how it’s on par with those two projection in reducing distortions.

The Mayr projection is a pseudocylindrical equal-area projection. The computation of one of Mayr’s projection equations depends on the solution of an elliptical integral, which likely contributes to its minimal use today (such things are supposedly slow to calculate on computers). In 2008, Ipbuker has proposed alternative solutions to generate it, utilizing analytical expressions. 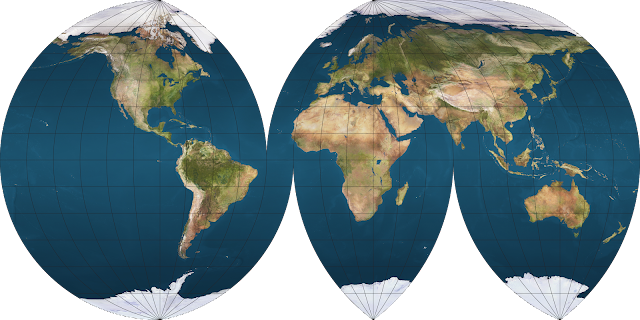 This actually looks pretty neat for an obsolete projection.

The Van der Grinten is a compromise projection with a circular shape, used by the Nat Geo from 1922 to 1988, when it was replaced by the Robinson projection. It was designed to combine the appearance of Mercator while having a rounded shape like Mollweide. This projection is normally cropped near the poles on world maps due to its extreme distortion there, although it’s able to show the entire world.

A circular projection that’s actually conformal exists, and is named the Lambert-Lagrange projection, which was apparently developed earlier than Van der Grinten, although it was unfortunately never popular, and is such an underrated projection. If I were to choose between Van der Grinten and Lambert-Lagrange, I’d definitely pick the latter due to its ability to show the entire world while maintaining conformality just like Mercator, which makes it superior. It’s essentially the Van der Grinten successor that never was. 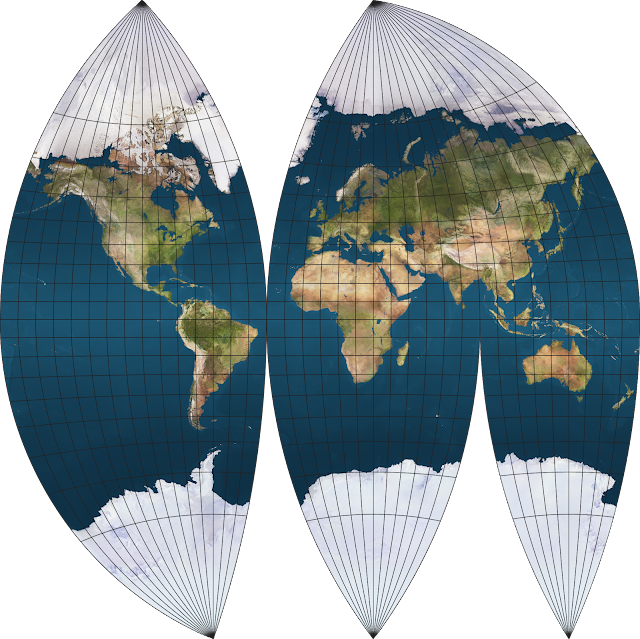 Here’s something you might have been waiting for: the Winkel tripel projection, now in interrupted form. If you like Nat Geo’s preferred compromise projection, you better see this. 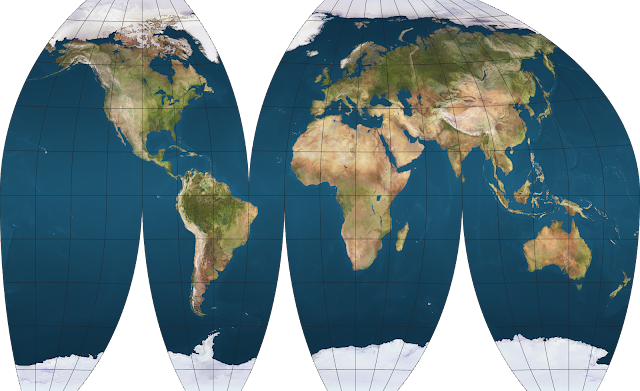 Another excellent minimum-error projection in interrupted form. To be honest it looks better than the interrupted Winkel tripel. 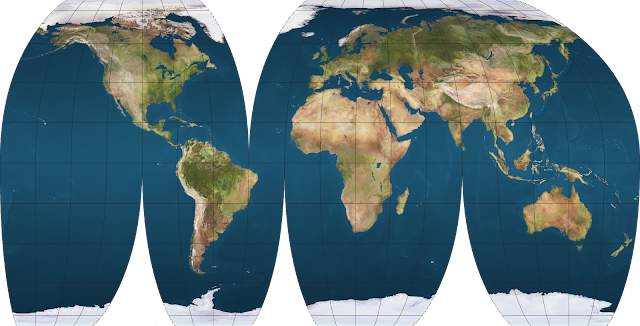 Other projections that are interruptible

Azimuthal equidistant is the only azimuthal projection that can be interrupted. This comes at the cost of having more severe stretching on regions farther from the center.

Other azimuthal projections can’t be interrupted because the spacing between each meridians aren’t equal. 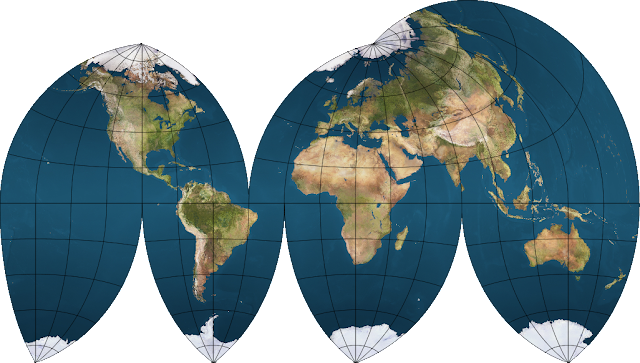 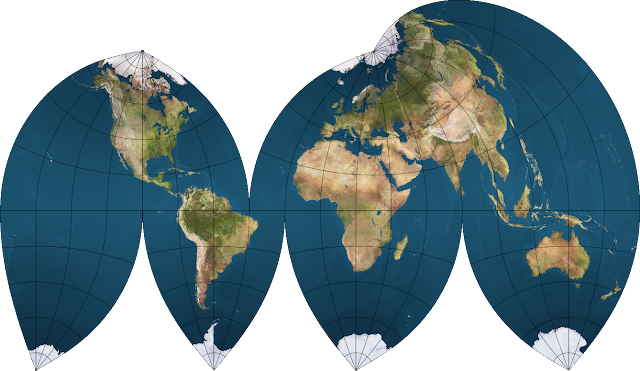 An interrupted American Polyconic projection, with Goode interruption pattern. Notice the severe distortions along the eastern hemisphere and the extreme stretching of the northern portions of Borneo, Sumatra and Celebes.

Other examples of interrupted polyconic projections are presented below.

The Canters W20 projection is a polyconic projection introduced by Frank Canters in 2002.