Initial cheat codes released on some sites, such as GTANet’s GTA San Andreas site. These only consist of cheat codes from GTA VC/GTA 3 that still works in GTA SA, as Rockstar hadn’t released any cheat codes yet.

IGN, along with some other sites, published some new cheat codes that were officially released by Rockstar

Lots of these codes have hit the streets, but there are still more. The bad news is that they’ve been hidden from the public. The good news is that we have some new ones right here. A good selection of bizarre and useful tricks that’ll send Carl Johnson soaring to new heights. You ready to fly? Here we go.

Edisoncarter found some new cheat codes using a DIY setup to brute-force the hashes. Brute-forcing with this method was rather slow, so only a few cheat codes were found each week. His results can be found here.

These include: cars fly, traffic is fast cars, free aim while driving, and all taxis have nitrous

I found them by scanning codes at high speed. I wired up a game pad to a PC’s parallel port using optocouplers.

There are actually two “cars fly” cheat codes that he found (see below). The former was discovered earlier but he replaced it with the latter because “it’s easier to enter”. 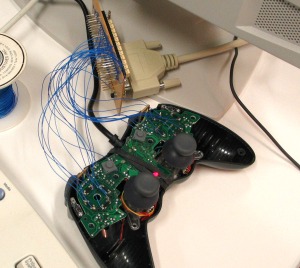 Manu, a user on GTAReactor found the “all green lights” cheat code. Where they got this cheat code from is unknown.

It almost seems like a habit, but again there is a new cheat to GTA: San Andreas, this time sent by Manu. Thanks a lot for this!

-rough translation of this page.

Edison’s DIY brute-force setup gained some publicity from the media. Slashdot and Joystiq (now Engadget) were some of the sites covering this.

“Gotta love edisoncarter for his cheesy, brute force, and effective hack of the PS2 controller to discover cheats for Grand Theft Auto - San Andreas. He used the parallel port of his PC connected to relays on the PS2 controller to step thru the combinations of button pushing needed to obtain cheats that were not released by Rockstar.”

Rockstar released some cheats for Grand Theft Auto: San Andreas around when it was released. Since then, various other cheats have appeared including a very amusing jetpack spawn that I abuse regularly.

I’ve often wondered how the cheats were found, and this page of GTA: SA cheats explains at the end. One clever person has hooked a PS2 controller to his PC and got it to send button combinations to the game. Hence, so many cool cheats have been found for the game that Rockstart [sic] never released. Ingenious.

Edison found the “cars float away when hit” cheat code

Edison found the “do nothing” cheat code

All taxis have nitrous

It also contained an interview with Craig Filshie, the game’s lead level designer.

T&T: Are there any cheat codes that haven’t yet been released or discovered?

CF: One enterprising player [edisoncarter] hooked a third-party PlayStation 2 controller to his computer and programmed it to input random button combinations. Ingenious… and with that method he discovered a number of cheats. There are still some to unearth, however, so keep looking!

Nope, I’ve checked out issue 121 on Retromags, which was uploaded only recently, and there’s no mentions of interviews or mystery SA cheat codes. Must be from issue 120 (February 2005), which hasn’t been uploaded yet, sadly.

Skiller and CMX found the 12 last unknown cheat codes. We dubbed this the “L1 cheat codes” since every single one of them ends with L1 due to the brute-force method they used.

Most of these cheat codes are 12 buttons long and can be substituted with the alternative ones: Riot mode, Spawn Hunter, Spawn Tanker, All cars have nitros, Max all vehicle stats, Hitman in all weapons, Max respect, Max sex appeal, Traffic is cheap cars, overcast weather, Peds attack you with guns, Country traffic + Born 2 Truck outfit, and Infinite ammo. The tool and its source code were available for download but the links are now dead and no one seems to have reuploaded it.

All the L1 cheat codes have been found, and Skiller uploaded the cheat code dump file to GTAForums. Unfortunately their tool didn’t work properly and dumped 13 button results (which doesn’t work in the PS2 version as it only stores the last 12 button presses), preventing further progress and it was never fixed so they never found the rest of the cheat code combinations.

Which is true. I’ve managed to find all of them and there are 205,586 working combinations in total.

Just two days after the game’s release on PC and Xbox, edisoncarter managed to find all the PC cheat codes, albeit in the short code form (e.g. HESOYAM) as the intended cheat codes hadn’t been found yet, except the spawn Hunter (OHDUDE) and Hydra (JUMPJET) as those are already the shortest ones.

Last edited date of edisoncarter’s PC cheats thread. Some of the intended cheat codes have been found but many were still missing.

Fast forward to 2015, nick7, a user on GTAForums posted a pair of intended cheats they found for PC: ThugsArmoury and NuttersToys. They noted these codes have a similarity to the ProfessionalsKit cheat code and GTA VC’s ThugsTools, ProfessionalsTools and NuttersTools cheat codes.

Alexander Blade, another GTAForums user, hinted the presence of all the intended PC cheat codes in the Android version.

Alexander Blade hinted the location of the intended cheat codes in the Android version.

Alexander Blade published all the intended PC cheat codes hidden in the Android version of the game. By the time he published this, it’s been almost 10 years since edisoncarter’s last edit to the PC cheats thread.